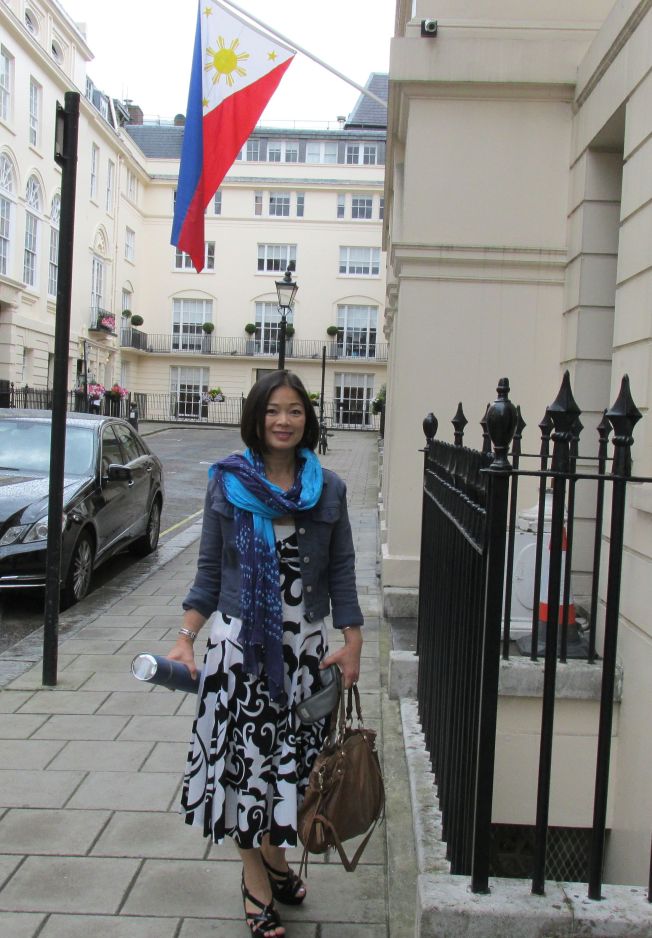 The Philippine Embassy is just off Trafalgar Square

Last week, in under 48 hours, we went from sunny San Diego to (unseasonably) sunny and rather steamy London for a book event at the Embassy of the Philippines.  The dual presentation on Philippine literature and economy that Carol Dominguez and I had earlier put on in New York and Chicago was hosted by Ambassador Enrique Manalo and his able team welcomed us to the embassy, which has a prime location just off Trafalgar Square. London overflows with so many museums, pubs, and parks that we barely had time for jet lag.  Now that we’ve flown back across the pond, I have  time to look back on that lovely, hectic week.

After nearly 2 decades we returned to King’s Cross

The King’s Cross/St. Pancras underground station closest to our  hotel seemed oddly familiar.  I realized later that nearly two decades ago, my parents had flown my husband and I to London as newlyweds. The EuroStar train we took to Paris so many years past departs from this station.

Since we arrived several days before the book event, we had lots of  extra time to explore. My first Mecca was an easy 15 minute stroll from the hotel.

The desk on which he wrote one of his novels – note the leather top worn down from all that impassioned scribbling.

Our days settled into a routine – sometimes a little yoga in the park, a quick breakfast and mornings spent apart – John to the library to pore over mouldering manuscripts, I to the next neighborhood I wanted to explore.

Friends had recommended Borrough Market, which a must-see destination for foodies like me. 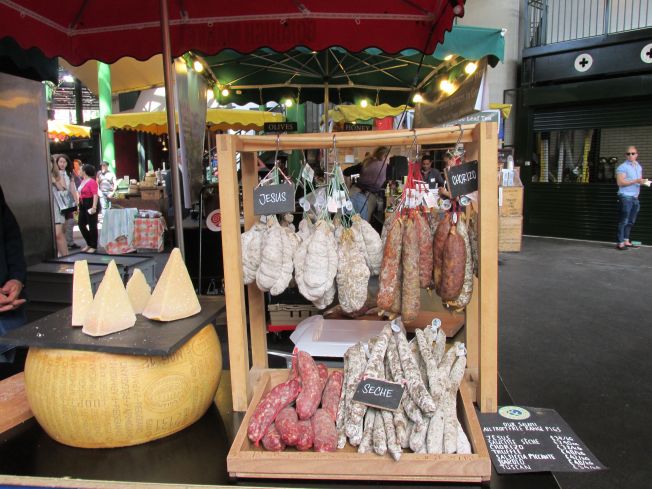 Heavenly sausages at Borrough Market. The pale ones hanging on the left are called Jesus.

A place of worship has been on this site since 606 A.D.

Since Penguin and Random House have merged, Candy and I are now what you might call “sister authors.” Her award-winning YA novels Tall Story and Shine are published by Random House UK and my  own The Mango Bride was issued by Penguin.  Comparing our respective paths to publication was most enlightening.

Candy showed me around High Gate Cemetery, where John met us at his own personal Mecca, the tomb of Karl Marx:

“The philosophers have only interpreted the world in various ways. The point is to change it.”

The lovely English twilight lasts past 9 p.m., leaving us with  ample time to visit Camden Market for dinner…

Camden Market must be among the most picturesque in Europe

More good news followed that evening. Taryn my literary agent emailed a PDF of the cover design of the Spanish edition of The Mango Bride, with a most poetic interpretation of the title:

Nothing lost, most everything gained in the Spanish Translation, out in time for Christmas

Persistent jet lag was still causing us to doze off in the tube and on buses, but the urge to explore proved incentive enough to suppress the need for sleep.

Saturday morning we met up with Scott and Amit. Amit is an old Fulbright friend of John’s, who now teaches at the City College of London. 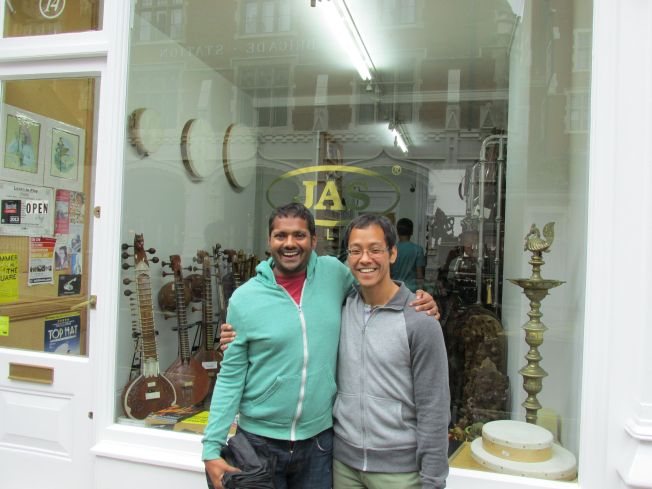 By Edgeware road, one locus for of Middle Eastern and South Asian shops and restaurants

On Sunday Lydia, a college friend of John’s who is now head curator at Barbican Museum, met us for brunch in the Shoreditch neighborhood, another picturesque London district with various attractions:

Shoreditch is famous for its graffiti

English wit proves useful for most anything

While in England, it would have been silly to eschew beer, so I traded in cocktail hour vodka tonics for a nightly pint at the pub. Most nights we tried Czech and Dutch brews but at this pub, the bartender insisted  San Miguel on draft surpassed Stella Artois and I was happy to drink to that. 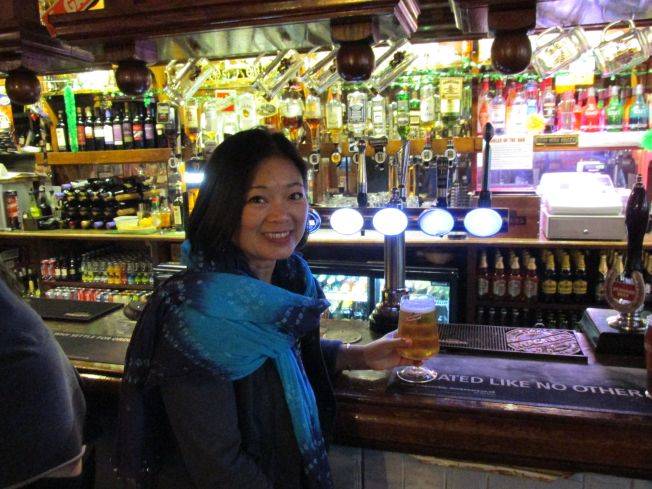 At long last, Monday arrived, and folks gathered at the Embassy for the dual presentation by Carol Dominguez and I on Philippine literature and economy.

Talking about my Path to Publication at the Embassy

On our  last day we squeezed in a walking tour and a final pub dinner with Scott and Amit. 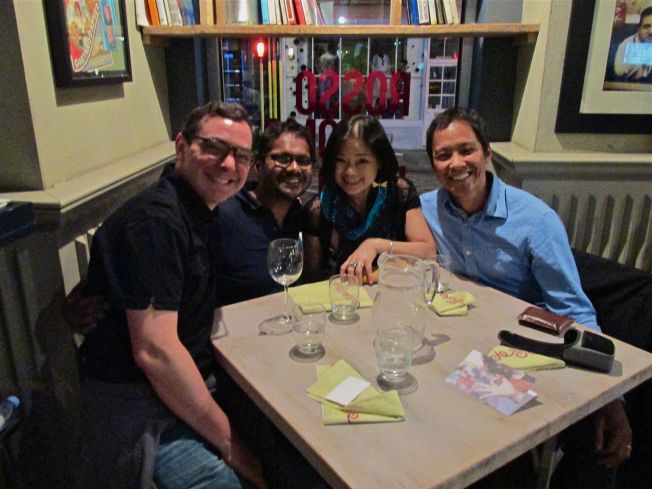 As if that were not enough excitement for one week, on the flight home we had the great good fortune to be seated next to stand-up comedian and star of the TV show All Worked Up, Jackie Pucci.  Jackie has opened comedy shows for Jon Lovitz and has given parking tickets to everyone from Brad Pitt to Halle Berry in her beat in Venice Beach. 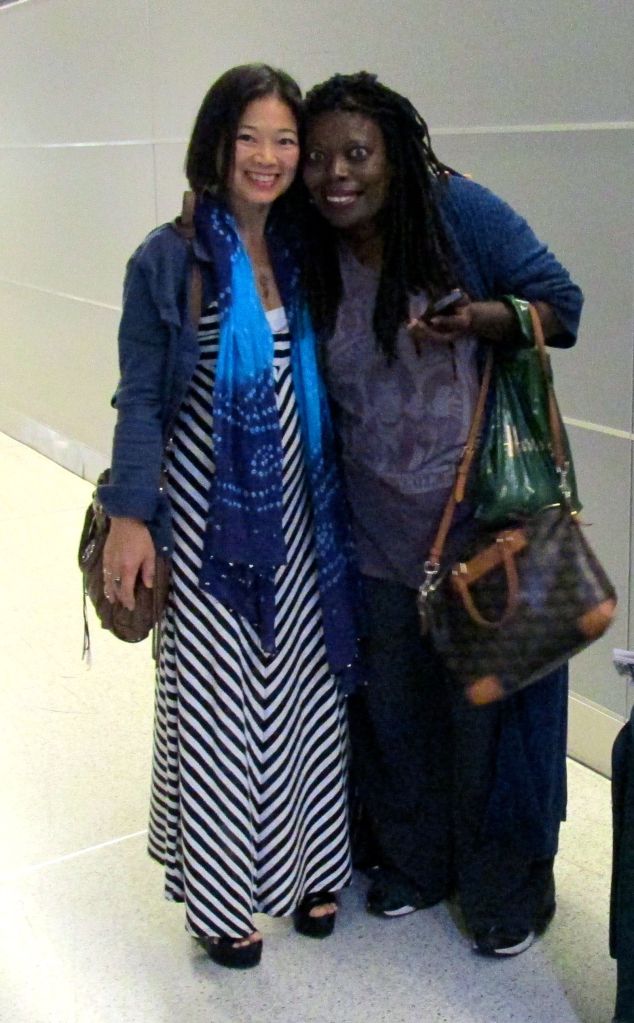 Jackie had also traveled to London to perform in a show.  Over the 7-hour flight, we bonded as fellow  journeymen in the ceaseless quest to tell a good tale.